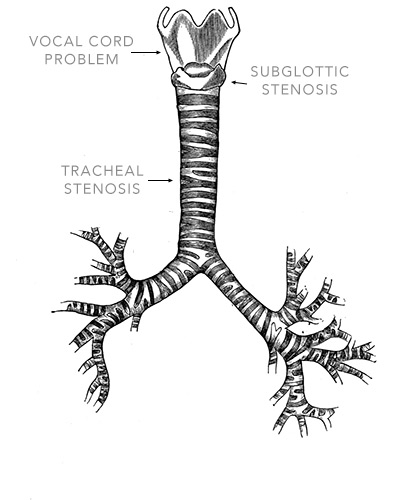 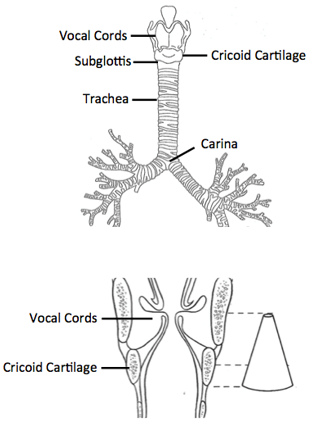 The adult trachea is composed of approximately 20 C-shaped cartilaginous rings that are connected by fibrous bands and covered by a respiratory lining.

It extends 10-13cm from the cricoid cartilage to where the airway separates into right and left main bronchi (a place called the carina).

The subglottis is a specific portion of the windpipe (trachea) located just below the vocal cords. It extends down to the bottom of the cricoid cartilage. When looking at the neck straight on (like you were speaking with someone), it is shaped like an upside down cone.

Scar tissue (fibrosis) and inflammation in the subglottis can lead to restricted air movement. Symptoms may include shortness of breath upon exertion (dyspnea), hoarseness, and a high-pitched sound when breathing in or out (stridor). The noisy breathing that characterizes stridor can resemble (and is often mistaken for) wheezing. These symptoms often lead affected individuals to be misdiagnosed with asthma. Stridor and shortness of breath with exertion can be slowly progressive, worsening over a period of years so that affected individuals are gasping for breath after simple activities or even at rest.

Other symptoms that have been reported in adults with subglottic stenosis include voice changes, increased mucous production, and a persistent cough.

There are a variety of known causes of subglottic stenosis. The 3 “most common” causes include.

(1.) Most often, it results from prolonged intubation (i.e. having a breathing tube in place for several days), but can result from intubation for only a short period of time as well.

(2.) Subglottic or tracheal stenosis can occurs as part of autoimmune disorders such as Wegener’s granulomatosis, relapsing polychondritis, or lupus.

(3.) Additionally, subglottic stenosis can occur without know injury or illness, which is termed “idiopathic” (a term describing any disease that arises spontaneously without known cause).

Although different causes of subglottic stenosis affect patients in similar ways (i.e. stridor, and breathing trouble), the different diseases occur in unique populations and have different responses to therapy

Gender distribution is very different for the different causes. The idiopathic group was 93% females, significantly more than the autoimmune (68%), and post-intubation (62%) groups.

The intubation-related and autoimmune groups in general had more health problems that idiopathic patients (as you can see in the heatmap image in red).

These general differences between the groups of patients seem to related to the response to treatment., overall significantly more patients in the intubation-related (66%) and autoimmune (54%) groups were tracheostomy-dependent compared to idiopathic (0%) patients.

This understanding is the foundation of precision medicine: treating patients as individuals, with therapy tailored specifically to them

Diagnosis is basically one of exclusion, in which the known causes of subglottic & tracheal stenosis are ruled out. A diagnosis is obtained through identification of characteristic symptoms, a detailed history, thorough physical examination and a variety of specialized tests.

A diagnosis of subglottic or tracheal stenosis may be suspected based on the results of pulmonary function tests (PFTs). These tests, which require an individual to breathe into a machine called a spirometry to measure how much air they can breathe out or take in, can reveal reduced airflow and reduced air volume.

The narrowed (stenotic) region of the airway can be seen with a computerized tomography (CT) scan of the neck. During CT scanning, a computer and x-rays are used to create a film showing cross-sectional images of certain tissue structures. Standard chest x-rays (radiographs) are also used by some centers to provide information on the tracheal air column and degree of airway compromise.

Blood tests (i.e. c-ANCA testing) is commonly performed to look for a specific autoimmune disorder known to cause subglottic stenosis (Wegener’s granulomatosis a.k.a. granulomatosis with polyangiitis or GPA).

Additionally testing is often completed to look for medical conditions that can contribute to subglottic inflammation (i.e. texting for gastroesophageal reflux, GERD)

A diagnosis of subglottic or tracheal stenosis is confirmed based on direct examination of the affected area of the windpipe through a procedure known as endoscopy. During this procedure, a physician runs a small tube called an endoscope down the throat. The endoscope allows a physician to view the lower recesses of the throat and the upper portion of the windpipe including the subglottis and trachea. An endoscopic exam can reveal the narrowed area and define its relationship to the vocal cords to help inform treatment choices.

Due to the rarity of subglottic stenosis, there are no treatment trials that have been tested on a large group of patients. Various treatments have been reported in the medical literature as part of single case reports or small series of patients.

Affected individuals who have a mild cases of subglottic stenosis (e.g. no symptoms) may not require treatment. Instead they are often treated with periodic observation to see whether symptoms develop or if the narrowing gets worse. 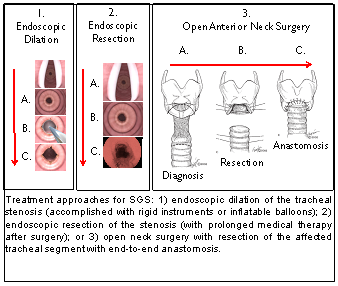 Several different surgical procedures have been used to treat subglottic stenosis. All approaches have unique benefits and drawbacks which can significantly impact the patient’s quality of life and day-to-day existence. Comparative data on the success of each approach or the drawbacks have never been systematically evaluated. Procedures are generally categorized into:

In endoscopic dilation the patient undergoes exposure of the tracheal scar with endoscopes through the mouth in the operating room. Dilation (widening) of the scar is accomplished by either rigid instrument, or inflatable balloon. Laser surgery, in which a laser in used to cut away the narrowed portion of the windpipe, has also been used in conjunction with endoscopic dilation. Endoscopic dilation is a minimally invasive procedure that is often done as an outpatient procedure. However, this procedure often only provides temporary relief and reports in the medical literature suggest a high recurrence rate, meaning the affected area will become narrow again and additional dilations (or another treatment) will be required.

Somewhat similarly, in endoscopic resection the patient undergoes exposure of the tracheal scar with endoscopes through the mouth, however a carbon dioxide (CO2) laser is then used to resect a significant portion of the scar, followed by long-term adjuvant medical therapy ( i.e. anti-reflux, antibacterial, and inhaled corticosteroid medications).

In individuals who do not respond to less invasive surgical options, open airway surgery may be performed. In open surgery (a.k.a. cricotracheal resection or laryngotracheoplasty), the trachea is approached through an external incision (or cut) on the front of the neck. During this procedure the narrowed area of tissue is cut away (resected) and the affected areas of the larynx and windpipe are surgically reconstructed.

Cricotracheal resection removes the scarred trachea and rejoins the 2 ends of the airway with stitches. If the scarred portion extends up to the vocal cords, this surgery risks voice changes after the surgery (post-operatively).

Laryngotracheoplasty in another form of open surgery that has been used to treat affected individuals. During this procedure, the cricoid is split open and some of the narrowed tissue is removed. Then, a piece of cartilage, usually taken from a rib, is molded into an elliptical shape and grafted into the affected area to widen the area and provide support. This surgery may require the temporary placement of a T-tube (a special type of stent) and a breathing tube (tracheostomy). Due to the different shape of the voice box after the operation, voice changes can result from this procedure as well.

Tracheal resection and laryngotracheoplasty are forms of open surgery and generally have been reserved for individuals with severe narrowing (e.g. a long and scarred area of narrowing) who haven’t responded to other therapeutic options. These procedures require hospitalization and carry greater risk than the less invasive options, but a significant body of evidence reports suggest excellent long-term results for appropriately selected patients

In rare cases, affected individuals may require the insertion of a tube into the windpipe through an incision in the neck (tracheostomy). This procedure has been used to help secure the airway for subsequent endoscopic or open surgical procedures. In patients with immediate airway distress, tracheostomy may be the initial treatment option.
In the News

During the annual Combined Otolaryngology Spring Meeting in Chicago, Illinois, NoAAC investigators are invited to attend a meeting and reception at The Gage restaurant on Thursday, May 19 from 11am-2pm. The Gage restaurant is located at 24 S Michigan Ave, about 5 blocks south of the COSM conference...

The NoAAC Network is holding a trial meeting concurrent with the American Academy of Otolaryngology-Head & Neck Surgery annual meeting in Dallas, Texas September 28th from 1-2pm in the Aloft Hotel....